Het Acteursgenootschap presents ‘The ConScience App’, a theatre piece designed to move the debate on scientific knowledge from the headlines to the daily work of academic researchers. The play sheds light on challenging scenarios in a lighthearted manner, aiming to start discussions amongst colleagues around common research integrity and culture dilemmas and experiences. For instance, what is the policy on mentioning co-authors? Or on assessing the work of your competitors? How do individuals balance mentoring others and maintaining the quality of research? What is the influence of the duty to publish on the quality of your research? 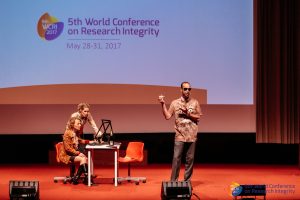 The ConScience App was developed based on ideas from members of The Young Academy of the Royal Netherlands Academy of Arts and Sciences and supported in part by a grant from the Dutch government. It has been performed at the opening session to the 5th World Conference on Research Integrity in Amsterdam in 2017 and at various venues, including universities, research institutes, and conferences in the Netherlands, France, and Norway. The performance is typically followed by 30-60 minutes of discussion around themes raised in the script, with an instruction manual to facilitate discussions.

Synopsis
Promising academic Jeroen Dreef is undertaking pioneering research at a Dutch university. With a disappointing PhD candidate and dito research data, and a professor breathing down his neck, he is in a race against the clock to beat his international competitors and to ensure his position at the university is safe.

The Royal Society and the UK research and integrity office has recently selected The ConScience App as one of the highlights in their Integrity in Practice Toolkit :
Download: UKRIO-Royal-Society-Integrity-in-Practice